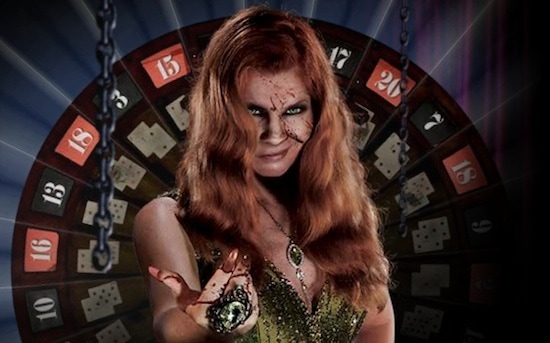 Lady Luck is a shape-shifting demon that has been around since man began taking chances. It is believed that the ancient people associated her with Tyche, the Greek goddess of luck, or her Roman counterpart, Fortuna. Lady Luck actually causes bad things to happen to whomever gambles with her and loses. Bad things also happen to people if she gives them a choice, and they make the wrong choice. Just one year before the closing of Shady Brook Rest Home and Sanitarium, a prisoner named Floyd Mercer hung himself, and left behind a notebook full of quotes about luck.

It turns out, he was the only person to ever gamble with Lady Luck, and survive. Floyd witnessed one of his friends Benny, playing poker with Lady Luck by his side and he won. Later, Floyd saw Benny getting eaten alive by Lady Luck in her true monstrous form. He escaped when she saw him. He faked being crazy to get into the asylum and stay alive. Eventually, Floyd realized Lady Luck found out where he was, and he hung himself. Since then, Lady Luck had made sure everyone takes an extra gamble. Lady Luck also has two forms that she takes. One is a beautiful temptress, and the other is a savage demon.

Lady Luck had a direct connection with each house at HHN 21. Each scenario involved some kind of decision made, which Lady Luck was responsible for. In every case, the choices made were the wrong ones.

John Hawthorn is looking for a plot of land to build his future home. Lady Luck, takes the form of an old spinster who offers him two plots of land to build on. Hawthorn chooses the wrong plot of land. His wife, Elizabeth, falls ill and dies. Instead of building a home on the plot of land, be builds a memorial garden for his wife, which eventually grows into a cemetery. An alchemist by the name of Malcolm Trumbull, embalmed the body of Elizabeth Hawthorne in such a way that her spirit would never rest. On the third anniversary of his wife's death; distraught, Hawthorn took his own life. Now, restless spirits roam the Hawthorn Cemetery, which include Elizabeth and John.

A young American by the name of Edmund Clarke, is considering joining the World War I efforts with the British Troops. His family runs a food business and they attempt to convince him to stay at home and help run the business. While out and about one day, Edmund comes across two recruiting posters for the war. One encourages people to enlist and fight in the war, while the other encourages to stay and help the war effort from home. Lady Luck is on the poster which encourages enlistment. Edmund chooses the first and enlists.

Juliette is a research assistant in Antarctica trying to get to a nearby Norwegian research station. While flying her helicopter towards the station, Juliette realizes that her copter is running low on fuel. She informs an air traffic controller of her situation. The controller gives her the option to attempt to make it to the station, or stop nearby to fuel first. Juliette, chooses to keep going and try ot make it to the research station. The air traffic controller, was none other than Lady Luck. If Juliette had stopped, perhaps she would not have encountered The Thing.

Larry Kurtzberg was a huge Broadway star in the 1930's. By the late 1970's, Larry's career was virtually nonexistent. Needing work, he seeks the help of a talent agency. The agency appoints a representative for Larry. We know her as Lady Luck. She informs Larry that the only thing they have for him, is as a late night creature feature host in Carey, Ohio. He can take the the job, or be dropped by the talent agency and go without work. Larry takes the job. Initially, the show is successful. When the show's ratings begin to drop however, producers inform Larry the he is being fired. He literally goes insane and proceeds to go on a rampage throughout the TV station.

SAWS N' STEAM: INTO THE MACHINE

The Horizon is not the beautiful utopia that it claims to be. Instead, it's a vicious place that likes to lure unsuspecting people looking to live in this "utopia", to their "machine". What is the machine? It extracts water from the human body because The Horizon is fresh out. When someone wants to become a citizen of The Horizon, they are required to take an aptitude test. The test is a front, really trying to gather information about how much water your body will produce. Lady Luck, is the person administering the test! Once you are a "citizen", you can choose to go the the facility that houses the machine directly, or be taken there by force when you turn 30.

NEVERMORE: THE MADNESS OF POE

Poe had to make a choice whether to take a ship back to Boston, his birthplace, or Baltimore, where he would later wed Virginia Clemm. He chose Baltimore, and the ticket taker who escorted him to the ship to Baltimore, was none other than Lady Luck. It is in Baltimore where Poe slowly slipped into madness, which started when his wife Virginia died of TB.

Louis and Bubba are your typical college students. Bubba, is not doing very well in class. Lucky for him Louis is the assistant to their college professor. Their professor? Yep, Lady Luck. Louis has the keys to a locked cabinet, where the professor keeps all the answer keys for tests. To help Bubba out, Louis ventures into the cabinet to retrieve the answer keys, but they find something else. The professor has an odd looking relic in her cabinet, which bares a resemblance to a Ouija Board. Thinking that this may be a good way to impress some girls, they take the board back to their dorm room. Lady Luck gives the guys a call and warns them about the dangers of the board. She gives them the choice to return it, or keep it. They keep the board and continue with their plan, inviting some girls over to mess around with the board together. Instead of the fun time the boys had envisioned, they unintentionally open a portal to another realm run by demons. The opened portal also burns everything around it when opened. That may unfortunately have included Bubba and Louis...

The Philippa Muniz is the little known 4th ship in Columbus's fleet. The ship was captained by Antonio Cabot. Columbus and Cabot were rivals. They went before Queen Isabella of Spain, who commissioned the expedition, to ask for a decision about who would lead the expedition toward the New World. Lady Luck, in the guise of Queen Isabella, gives Cabot the choice between heads and tails in a coin toss. Antonio Cabot selects heads, but the coin comes up tails. Columbus leads the expedition and Cabot captains the 4th ship. Cabot and the crew aboard the 4th ship become angry at the decision and decide to attempt a mutiny against Columbus. A crew member aboard the Philippa Muniz, has a change of heart and tips off Columbus about the mutiny. The 3 remaining ships sink the Philippa Muniz. They all sign a pact to never speak of the incident. It is now 100 years later in 1592. A huge squall has brought the sunken Philippa Muniz up from the depths of the sea. The ship has landed at a Spanish fort and the "forsaken" crew is back to seek revenge.